Quick, throw your CDs away! There’s a roadblock!

First published on LoyarBurok on 2 November 2010 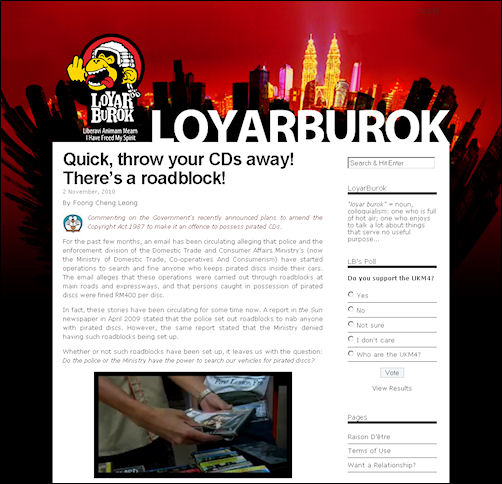 For the past few months, an email has been circulating alleging that police and the enforcement division of the Domestic Trade and Consumer Affairs Ministry’s (now the Ministry of Domestic Trade, Co-operatives And Consumerism) have started operations to search and fine anyone who keeps pirated discs inside their cars. The email alleges that these operations were carried out through roadblocks at main roads and expressways, and that persons caught in possession of pirated discs were fined RM400 per disc.

In fact, these stories have been circulating for some time now. A report in the Sun newspaper in April 2009 stated that the police set out roadblocks to nab anyone with pirated discs. However, the same report stated that the Ministry denied having such roadblocks being set up.

Whether or not such roadblocks have been set up, it leaves us with the question: Do the police or the Ministry have the power to search our vehicles for pirated discs?

Section 24 of the Police Act 1967 allows any police officer to stop and search without warrant any vehicle which he has reasonable grounds for suspecting is being used in the commission of any offence against any law in force. The Ministry has also authority to enter and search a vehicle without warrant provided that he has reasonable grounds for believing that delay in obtaining a search warrant would lead to the destruction of evidence.

Under section 41 of the Copyright Act 1987, it is an offence to possess, other than for private and domestic use, any infringing goods. Any person who has in his possession, custody or control three or more infringing copies of a work or recording in the same form is presumed to be in possession of such copies otherwise than for private or domestic use. This basically means that possession of a pirated disc for private and domestic use is allowed provided that the pirated disc do not exceed three or more copies of the same form.

The offence would attract a fine not less than RM2,000 and not more than RM20,000 for each infringing copy or imprisonment for a term not exceeding five years or to both.

Can the police or the Ministry stop and search your vehicle?

This situation may soon change.

The Government recently announced plans to amend the Copyright Act 1987 to make it an offence to keep pirated goods, similar to the offence of possessing stolen goods. Although the Government has not announced the details of the amendment, such news is worrying. This basically means that anyone in possession of pirated goods is committing an offence. Hence, any police, with reasonable grounds that there are pirated goods in a vehicle, may stop and search the vehicle.

What if the driver had purchased genuine songs from the internet and had it copied into a CD? The driver would have to prove and explain that he had genuinely purchased the song.

An outright ban of unauthorised possession copyrighted materials will create fear and chaos to the country and society.