First published on The Star Newspaper on 20 January 2011. 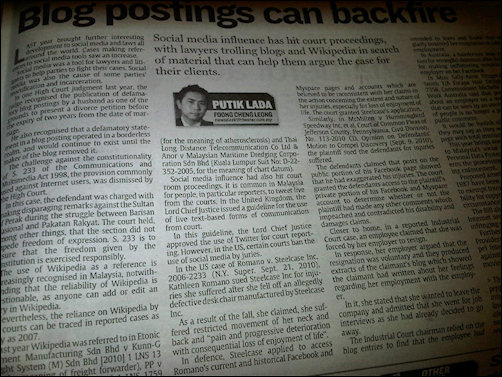 Social media influence has hit court proceedings, with lawyers trolling blogs and Wikipedia in search of material that can help them argue the case for their clients.

In one High Court judgment last year, the judge recognised the publication of defamatory blog postings by a husband as one of the grounds to present a divorce petition before the expiry of two years from the date of marriage.

He also recognised that a defamatory statement in a blog posting operated in a borderless realm, and would continue to exist until the maker of the blog removed it.

The challenge against the constitutionality of S. 233 of the Communications and Multimedia Act 1998, the provision commonly used against Internet users, was dismissed by the High Court.

In this case, the defendant was charged with making disparaging remarks against the Sultan of Perak during the struggle between Barisan Nasional and Pakatan Rakyat. The court held, among other things, that the section did not impede freedom of expression. S. 233 is to ensure that the freedom given by the Constitution is exercised responsibly.

The use of Wikipedia as a reference is increasingly recognised in Malaysia, notwithstanding that the reliability of Wikipedia is questionable, as anyone can add or edit an entry in Wikipedia.

Nevertheless, the reliance on Wikipedia by our courts can be traced in reported cases as early as 2007.

Social media influence had also hit court room proceedings. It is common in Malaysia for people, in particular reporters, to tweet live from the courts. In the United Kingdom, the Lord Chief Justice issued a guideline for the use of live text-based forms of communication from court.

In this guideline, the Lord Chief Justice approved the use of Twitter for court reporting. However, in the US, certain courts ban the use of social media by juries.

In the US case of Romano v. Steelcase Inc, 2006-2233 (N.Y. Super. Sept. 21, 2010), Kathleen Romano sued Steelcase Inc for injuries she suffered after she fell off an allegedly defective desk chair manufactured by Steelcase Inc.

As a result of the fall, she claimed, she suffered restricted movement of her neck and back and “pain and progressive deterioration with consequential loss of enjoyment of life”.

In defence, Steelcase applied to access Romano’s current and historical Facebook and Myspace pages and accounts which are believed to be inconsistent with her claims in the action concerning the extent and nature of her injuries, especially for loss of enjoyment of life. The court granted Steelcase’s application.

The defendants claimed that posts on the public portion of his Facebook page showed that he had exaggerated his injuries. The court granted the defendants access to the plaintiff’s private portion of his Facebook and Myspace account to determine whether or not the plaintiff had made any other comments which impeached and contradicted his disability and damages claims.

Closer to home, in a reported Industrial Court case, an employee claimed that she was forced by her employer to resign.

In response, her employer argued that the resignation was voluntary and they produced extracts of the claimant’s blog which showed the claimant had written about her feelings regarding her employment with the employer.

In it, she stated that she wanted to leave the company and admitted that she went for job interviews as she had already decided to go away.

The Industrial Court chairman relied on the blog entries to find that the employee had intended to leave and found that she had gladly tendered her resignation to take on new employment.

In Australia, a hairdresser won compensation for wrongful dismissal after losing her job for making unflattering remarks about her employer on her Facebook.

In Miss Sally-Anne Fitzgerald v Dianna Smith T/A Escape Hair Design [2010] FWA 7358, Commissioner Michelle Bissett for Fair Work Australia said that posting comments about an employer on a website (Facebook) that can be seen by an uncontrollable number of people is no longer a private matter but a public comment.

It would be foolish of employees to think they may say as they wish on their Facebook page with total immunity.

Proposed amendments to the Copyright Act 1987 have been drawn up in the form of a Bill to exempt Internet service providers from liability for copyright infringement under certain circumstances.

The Bill also empowers the court to order an Internet service provider to disable access to infringing material.

Furthermore, the so-called Internet Service Providers Liability Act may be passed to compel Internet service providers to take action against their users if they download songs or movies illegally.