– Getting the IP address is one way, but may not always be possible
– On issue of defamation, Section 114A has been applied retrospectively

ONE of the most difficult issues to deal with in cybercrime or cyber-bullying cases is finding the perpetrator online. My years of blogging have brought me some experience in dealing with this issue, especially when dealing with ‘trolls.’

I am glad to say that it is not impossible. Some guesswork is needed. Normally, such a perpetrator is someone you know, although he or she may or may not be close to you. Sometimes, however, it would be just a stranger.

There was one case where the perpetrator was found to be a friend’s spouse whom the victim had only met a few times. Strangely, there was no animosity between these parties.

In one case which I was personally involved, I made a guess on the possible perpetrator and worked from there. Eventually, the person confessed after being confronted.

Getting the Internet Protocol (IP) address of the perpetrator is one of the conventional ways to track someone down. Internet service providers (ISPs) assign unique IP address to each user account. However, IP addresses may not be retrievable if the person is on a proxy server.

Another problem is the jurisdictional issue. Many servers storing such IP addresses may be located overseas and owned by foreign entities. One may have to initiate legal action overseas to get such data, and many of these service providers do not release their user information easily due to data protection laws or their strict privacy practices.

In tracing the perpetrator, who had posted defamatory statements on two Google Blogspot websites, the Plaintiffs filed an action called a John Doe action in the Superior Court of California. In compliance with the Court order, Google traced the blogs to two IP addresses which were revealed by Telekom Malaysia Bhd to be IP addresses belonging to the 1st Defendant’s account.

In the same case, the High Court had held that the controversial Section 114A (2) of the Evidence Act 1950 applied retrospectively.

S. 114A (2) provides that the burden of proof lies on the subscriber of an ISP to prove that a certain statement was not published by him or her. The 1st Defendant failed to convince the Court that s. 114A (2) does not apply because the defamatory statements were published before the enforcement date of s. 114A(2).

This retrospective stand however was not followed in the case of PP v Rutinin Bin Suhaimin [2013] 2 CLJ 427 as the High Court held that s. 114A does not apply retrospectively.

Perhaps the distinguishing factor between these cases is that the first case involved a civil dispute whereas the latter is a criminal prosecution.

Readers may recall that the #Stop114A campaign was initiated to get this law repealed. I am proud to say that Digital News Asia (DNA) was one of the organisers and participants in shutting down its website for one day. The campaign attracted the attention of Prime Minister Najib Razak but unfortunately, the law remained.

Going back to the case, the Court held that the 1st Defendant had failed to prove that he was not the publisher of the content. The 1st Defendant is now liable for a payment of RM600,000 (US$180,000) as damages to the Plaintiffs.

In proving the identity of Papagomo, instead of tracing the IP address of Papagomo, the Court relied on the statement of a person who had met Papagomo in person before. The former also took a picture with Papagomo and this picture was tendered in Court.

There are other unconventional methods to identify a person online. I have heard of a private investigator entering a person’s home without knowledge to gain access to the computer of that person.

One method that I always use is to find something unique in the content posted by the perpetrator. For example, I recently concluded that a website was held by a cyber-squatter by doing a Google search on certain sentences that appeared on the website. The cyber-squatter’s website looked like a legitimate website, but the search revealed that the same facade had been employed by the cyber-squatter on several websites using well-known brand names.

If there are images involved, a Google Image search would be useful to find whether other websites are hosting the same image.

It is of utmost importance that one must have reliable evidence to prove the identity of a perpetrator before suing or charging them. The person doing such investigation should be knowledgeable enough to conduct the investigation, know the rules of producing evidence and testifying in Court, and to thwart all challenges by the perpetrator’s lawyers.

Failure to do so would result in the case being dismissed or in a worst scenario, an innocent person being charged or sued in Court.


I am no expert in election laws but GE13 Candidates should take note of this. If you are running a blog, I suggest you moderate or close the comments section until and after the 13th General Election.

Also, if you have in any manner facilitated to publish or re-publish the publication, you are presumed to have published the content of the publication.

This means that website owners are deemed to be publishers of contents of a publication although the author of the publication is someone else.

In this regard, you will potentially commit an election offence if someone posts a comment which falls within the scope of corrupt practice. If found guilty of an election offence, the election of a candidate will be declared void (s. 32 of the Election Offences Act 1954).

What I have mentioned is not without basis. A similar scenario had happened after the 12th General Elections. In Kho Whai Phiaw v Chong Chieng Jen (Election Petition No.: 26-01-2008-I), an elector in the Bandar Kuching constituency presented an election petition to have Mr. Chong Chieng Jen’s (representative of the Democratic Action Party (DAP)) election declared void.

The elector sought to have Mr Chong’s election avoided on the ground that the latter had engaged in the corrupt practice of (i) undue influence and (ii) bribery, to procure his victory in the election. The elector alleged, among others, that a letter from one Mr Smith published on the comment section of Mr Chong’s blog site is said to contain certain threatening statement. The elector alleged that Mr Chong had exercised undue influence over the non-Muslim voters in the Bandar Kuching constituency through Mr Smith’s letter appearing on his blog site.

Fortunately for Mr Chong, the High Court held that Mr Smith’s letter was posted by one commentor by the name “Responsible Christian Voter” (‘RCV’). Mr. Smith was the author of the letter and it was RCV who published that letter through Mr Chong’s blog site. The Court held that Mr Chong is therefore not the publisher of the letter. The case is later upheld by the Federal Court. (see Kho Whai Phiaw v Chong Chieng Jen [2009] 3 CLJ 201)

But Mr Chong’s case is pre-114A case. If s. 114A applies, Mr Chong is considered as the publisher of the letter as his blogsite had facilitated the publication of the letter. Mr Chong could potentially commit an election offence if 114A applies. That is the effect of 114A. It creates liability on a virtual platform provider.

This, of course, is not tested in our Courts yet. One may argue that it is the blogsite provider (e.g. Google who owns Blogger.com) but this is only provided that such blog is hosted by such blogsite provider.

Nevertheless, as an abundance of caution, GE13 candidates should close their blog comments section to avoid such actions. Interestingly, Mr Chong’s blogsite has closed its comments section.

A Facebook Page is also another concern. It may be arguable to say postings made by users on a Facebook page is not published by the Facebook page administrator as it appears on a separate page. (Illustrated below). 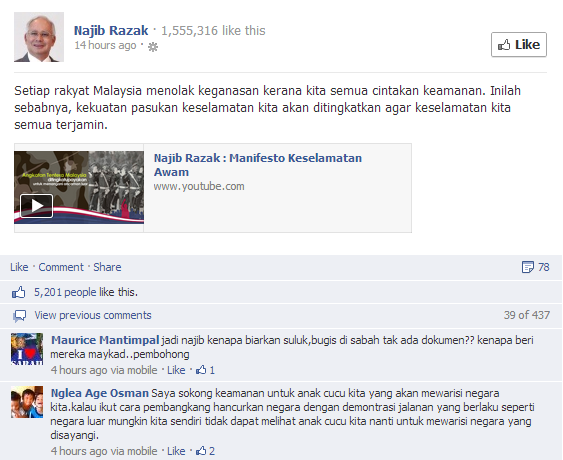 With this risk of having an election declared void, I hope that the new Parliament will relook into 114A when it convenes in the future.

Dissecting the presumption of fact relating to publication in the controversial new Bill.

The Evidence (Amendment) (No. 2) Bill 2012 was one of the bills rushed and passed by the Parliament recently. Minister in the Prime Minister’s Department, Datuk Seri Mohamed Nazri Aziz, when winding up the Evidence (Amendment) Bill 2012, said the use of pseudonyms or anonymity by any party to do cyber crimes had made it difficult for the action to be taken against them. Hence, the Evidence Act 1950 must be amended to address the issue of Internet anonymity.

The amendments introduced s. 114A into the Evidence Act 1950 to provide for the presumption of fact in publication in order to facilitate the identification and proving of the identity of an anonymous person involved in publication through the internet. In simple words, s. 114A introduces 3 circumstances where an Internet user is deemed to be a publisher of a content unless proven otherwise by him or her.

Although it is stated that the amendment is to cover anonymous persons on the internet, the effect of the amendment is quite wide. You see, we, especially social media network users, generally do not use our real names on the Internet. We use nicknames and pseudonyms. Our home addresses do not appear on our account. We sometimes use fictional characters or even digitalized images of ourselves as our profile picture. All these are done to protect our own privacy. So, if none of my personal details appear on my account, does this mean I am anonymous? If someone’s identity cannot be directly ascertained from his account, I would think that he would be anonymous.

Admittedly, the amendments certainly saves a lot of the investigator’s time. It is very difficult to trace someone on the Internet. It will make prosecution for, among others, defamation, offences under the Communication and Multimedia Act 1998 and Computer Crimes Act 1997 and, election offences much easier. But it is not impossible to trace someone. There are many cases where perpetrators are caught and charged.

I do not see the logic to deem someone to be a publisher. If an investigator is unable to trace the anonymous internet user, then why should the innocent Internet user take the rap? The onus of proof should always be on the prosecuting side. In the English case of Applause Store Productions Limited & Anor v Grant Raphael [2008] EWHC 1781 (QB), the claimants were awarded £22,000 in damages against Raphael, an old school friend, who had created a false personal profile of the claimants on Facebook. The claimants convinced the Court that Raphael was the person who created the fake profile even though he claimed that he had a party at his house and someone in that party created the account.

In summary, the new amendments force an innocent party to show that he is not the publisher. Victims of stolen identity or hacking would have a lot more problems to fix. Since computers can be easily manipulated and identity theft is quite rampant, it is dangerous to put the onus on internet users. An internet user will need to give an alibi that it wasn’t him. He needs to prove that he has no access to the computer at that time of publication and he needs to produce call witnesses to support his alibi.

Clearly, it is against our very fundamental principal of “innocent until proven guilty”. With general election looming, I fear this amendment will be used oppressively. Fortunately, the amendment is not in force yet. I strongly hope that the government will relook into this amendment.